Fortnite Joker Skin Bundle PS4 Release Date: Epic Games has just released an update for Fortnite. The new Fortnite update packs a lot of new features, upgrades, skins, weapons, etc. But what fans were looking for it not provided by Fortnite developers. 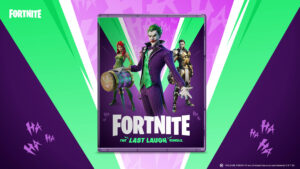 Over the past few months, Epic Games is doing something different, something related to Marvel’s Storyline. Before this, Epic Games added superheroes such as Deadpool and Thanos to the Battle Royale. Epic Games has done something similar to this and fans are loving Fortnite’s New Era.

Epic Games had a press release today, in this, Epic Games announced the Fortnite: The Last Laugh DLC. The Last Laugh costs around $29.99, for a physical disk. The DLC has not been announced in the in-game store yet. It will soon be available in Fortnite’s Item Shop.

Fortnite is looking forward to getting more of these events for the fans and fans are loving it too. Some reports also say that Fortnite has a deal with some other companies as well to get more on their platform which will be announced in the future. Marvel, Joker, and Poison Ivy is already there on their platform.

Fortnite had a reset for its item shop which available in-game on November 17 at 7 PM ET. Fans thought that it was a reset for the upcoming Fortnite Joker Skin Bundle but later they got to know that they did it because of new item arrival in the game.

With Fortnite 14.60, they have added some new items to the game such as New Currency, Mystique Boss, Fire Extinguisher, and Mushrooms.

The developers also took a server downtime with the update but that was taken in the morning which is around 4 AM. Galactus has also arrived with Fortnite’s latest update. The makers did some minor changes to the Items Shop as well which led them to reset it. They did some small and minor bug fixes for the Xbox platform in the game.

And the strange this which happened today with the developers is, they said they deployed the Patch for every platform at the same time but Xbox Series X/S and Xbox One got it first. So they posted this news on Twitter, have a look at the tweet.

The 14.60 Xbox update (Xbox One, Xbox Series X|S) has unexpectedly deployed early. We are investigating implications and will provide updates as soon as we can. https://t.co/ZrYfDei6Vt

The digital copy of the DLC, the Last Laugh will cost you around $17.99 in the Epic Games Store or Fortnite’s in-game Item’s Shop.

Hopefully, you will like our approach on the Fortnite Joker Skin Bundle PS4 Release Date.