Here we will guide you and provide you a line up that you have to overcome on How to beat Giovanni November 2020. 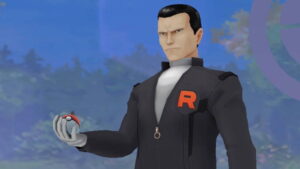 Pokemon Go is developed by Niantic and is a spin-off from the series catch ’em up. The Pokemon Go is growing big with a J curve in the recent years. The game has also faced a drop-off in its popularity and has recovered it as well and still continuing it up.

Giovanni is the villain in the game, who has been revolving around in the game since its first title. In the game, Giovanni is the head of the Team Go Rocket. Giovanni can be found using the Super Rocket Radar. Player are facing him from the last year but in the month next month, which is November 2020, will be updated and will be powerful then ever before, so player wants a guide on how to beat Giovanni in November 2020.

How to beat Giovanni November 2020?

Ther Persian is a normal pokemon that can also use Rock, Dark, Fairy moves, that Giovanni has. Fighting-type are the best moves to take down the persian but aren’t that important. Pesion is a simple pokemon that Giovanni’s team own but it can play hard battles as well. To beat the person, a good strategy would be to fight with persian and to prepare the charge move of the pokemon that the player has. Now we will discuss the four good Pokemon versus the Giovanni’s Persion. Have a look on them.

How to beat Giovanni November 2020: The Giovanni’s Persian Vs. The Four Good Pokemon

So these were all the pokemon to beat Giovanni November 2020.

After you have defeated the Giovanni’s Persian, he will send his Sandslash. The Sandslash is a complete ground-type pokemon. The Sandslash is weak to Ice, Water-types and Grass as well. To beat Giovanni’s Sandslash you must keep these things in mind. Ice, water are the safest counters, and the player has chosen a pokemon of these types he will easily defeat the Sandslash.

How to beat Giovanni November 2020: The Sandslash vs The four Good Pokemon

So these were the pokemon that a player can use to defeat Giovanni’s Sandslash in November 2020.

How to beat Giovanni November 2020: The Legendary Mewto vs The four Good Pokemon

The boss of the Team Go Rocket also owns a legendary Pokemon, The Mewto. Defeating Mewto in the Pokemon Go isn’t a easy task do for every pokemon. But with even with the extraordinary powers, weakness is there too. So the Mewto is weak to Bug, Dark and Ghost-types of pokemon. The best way to quickly take down Mewto would be using Charge Moves. The Charge moves of any pokemon will make it easier, even they have already charged in the last battle.