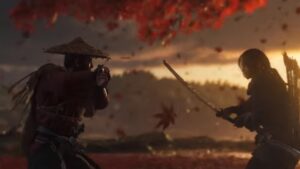 Sucker Punch announced that the player will be able to play “The Tale of Iyo” from Friday 30th October.

Ghost of Tsushima was launched back in July 2020 and sold approximately 1.9 million copies. Sucker Punch is already rumored to be working on a follow-up based on a new job opening at the company that mentions a feudal Japan setting.

Discuss more about Ghost of Tsushima Update 1.13 on reddit.

The Ghost of Tsushima Update 1.13 features a new game mode which is a new 2 player Story Mission. To play this story mission, first of all, update your game. After you have updated your game just visit Playstation Store from your PS4 to download a free unlock for Ghost of Tsushima: Legends, which will let you play.

A senior game designer from Ghost of Tsushima said that “Keep in mind that an internet connection and an active PlayStation Plus subscription will be required to play with other players.”

The Ghost of Tsushima brings another mode which is the new 4 Player Survival Mission which of course requires an internet connection to play. With this 4 player survival mission arrival, you will be able to play the game with your friends and mates.

With this new Game+ mode, you will be able to restart Jin’s story with all the gears you had at the end, but with more difficulties. Now you will face difficult enemies to match(You can later change to easier). You will have a new and extremely powerful horse and new equipment with upgrades.

Ghost of Tsushima Update 1.13 gets its First Raid, “The Tale of Iyo

As raids are a big deal in most of the online game, the Ghost of Tsushima studio has announced that the first raid will drop on 30th October 2020. The raids let the high-level players take on some of the most challenging content that the game has to offer. The raid is titled “The Tale of Iyo”, for this mode matchmaking will be disabled and players will have to form their team. The raid will require a team of 4 players to even attempt this.

Ghost of Tsushima has been a hit so far.